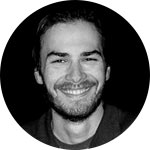 With lifelong passions for gaming, fitness and design, Jeff brings his unique talent for visual communication to the team with nearly 2 decades of experience across hundreds of projects in design and UX. A natural artist from early childhood, Jeff spent years honing his design mojo with advanced training in Human Factors Psychology (the interaction between people and the technical systems around them) and Ergonomic Design. In 2009 he founded Atlanta-based design studio, Cluster One Media, which quickly earned a reputation for out-of-the-box thinking and excellence in developing unique visual identity. In 2012, a friendly chat with an acquaintance at the local pool hall, named Mike, would eventually turn into FIX.

He has worked with businesses at every level, from small business brand development to consulting for multi-national corporations. A consummate perfectionist in his design ethic, Jeff’s highly iterative approach, which mixes art and science equally, results in designs that are as functionally sound as they are beautiful to look at.

In his spare time, Jeff practices what FIX preaches, with a strict exercise regimen and an ever growing cache of XBOX games that he swears he’ll “get to.” Also an accomplished guitarist, Jeff has shared the stage with artists like long-time Dave Matthews Band guitarist Tim Reynolds and the internationally touring California Guitar Trio.