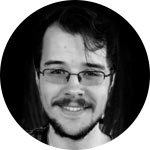 With a spirited dedication to art and a lifelong passion for video games, Ben spent time honing his talents and acquiring his BFA in Animation from Kennesaw State University. Ben’s tenure at FIX began with a summer internship, where his talents for character design, concepting and level design quickly won the team over.

Ben’s career took him to animation studio BentoBox, where he worked on several high profile projects, including The Masked Singer, before ultimately re-joining FIX, this time as Lead Artist.

Ben shares a passion for Tabletop roleplaying games, and often chances gaming sessions with other members of the team. When not creating art for FIX, he often employs his skills recreationally, creating illustrations and stories for much more personal projects.